Sharing the love of God with people outside of the congregation is vital for the mission of the church. We have the wonderful privilege as Paul says in 1 Thessalonians 1:1-10 of not just knowing the Gospel in words alone but with the Holy Spirit, power, and deep conviction. Being a disciple of Christ means sharing in word and deed the love of God and the peace of God which passes all understanding. To keep the Good News to oneself or solely with in the confines of the members of the congregation is to exhibit a feeble view of what God has for the world.

We consciously work at serving outside of ourselves with the knowledge that what God has done for us he also desires for every person in the world. The following is a list of various ministries and events that St. Matthew is involved or associated with. They are many ministries that we support because they can serve God in ways that we can not. We see the unity of the Spirit in a multitude of ministries outside of ourselves 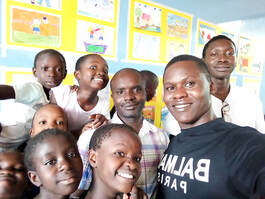 One Life Africa
A mission in the name of Christ to empower young people in Africa through education, mentoring and community service. One Life Africa exists to provide education scholarships to bright but needy students, mentor them through life decisions and equip them to serve Christ in their communities.
Andrew and Stephanie Onguka are the missionaries who run One Life Africa. Andrew has served in Mathare slums for 17 years. He and Stephanie were married in 2006. They have been serving as missionaries with SIM (Serving in Mission) Andrew directs OneLife Africa and Stephanie works with medical education.
To find out more about One Life Africa go to www.OneLifeAfrica.org

Mission Festival
This is a semi-annual event supported by NALC and LCMC churches striving to invest in mission and evangelical outreach in our communities and around the world. A previous Festival was held at St. Paul Lutheran in York Pa. on March 22nd 2014. The Guest speaker was, The Rev. Dr. Gemechis Buba, Asst. to Bishop for Missions, NALC. The Fall of 2016 Festival was held at St. Matthew Bowleys Quarters.

HCJB World Radio, Quito Ecuador Supporting:
Missionaries, Gary and Kathy Meier, Short Term Team Leaders with HCJB Ministries Quito Ecuador. Now officially retired, Gary and Kathy have been missionaries with HCJB Global (now) Reach Beyond, since August 23, 1991. They have served both in the Latin American Region and in the USA. They continue to lead short-term teams to Ecuador. They have lead five different teams from St. Matthew to Quito. Gary serves on the Board of Directors of Mission to Missionaries, currently wwweloping EdenRidge, a retreat center for missionaries.

Pastor Pedro Pablo
Santos Pamba Missionary Alliance Church and School
Pastor Pablo’s dream of providing a church and school for the community of Santos Pamba, a small poor community south of Quito Ecuador has been years in the making. Serving the Quichua Indians, he has face many challenges including restrictions from the Government. Numerous mission teams have helped build a school which provides schooling for children who otherwise could not attend school.

Palm Ministries
Atlanta Georgia, State Side Support for Ministries outside of the United States and specifically to the mission at Santos Pamba.

Pastor Ramiro Baez
Buen Pastor Missionary Alliance Church and School. Buen Pastor church and school was the first team mission trip destination from St. Matthew. Since then the school has grown and supports itself.

Luther & Sandy Meier are Americans living in Britain since 1976. When God dramatically called them into ministry in 1975, Luther left behind his university teaching and performing career in music. They sold their home and joined an evangelistic music team taking them to 20 countries over 6 years. They witnessed thousands of Eastern and Western Europeans coming to Christ.

The Meiers came in contact with Missionary Ventures in the early 90’s and were ministry associates until 1995, when they joined full time and founded Missionary Ventures Europe. They pioneered ministry primarily in Uganda, India and Russia where they established leadership training colleges that flourished along with short term teams and various projects. In 2005, Luther was appointed as vice president at large of Missionary Ventures International.

During 40 years in foreign missions, they have ministered in 36 countries. Sandy has sung in 15 different languages for evangelistic events and worship settings, as well as joining Luther by speaking in conferences and Bible colleges. With primary responsibilities of spiritual oversight for MVI, Luther and Sandy continue ministering the Word of God.

Compassion International
St. Matthew Lutheran Members, sponsoring at least 30 children in Ecuador and Uganda and all over the world

St. Matthew is an inspiring, nurturing, sharing congregation empowered by God’s Love and Holy Spirit to bring His Light to the world. We consciously work at serving outside of ourselves with the knowledge that what God has done for us he also desires for every person in the world.